If you've been following our blog, you might notice some favoritism when it comes to embedded targets... We've been exploring the NETGEAR R7000 for several blog posts. This pattern stems from a number of product characteristics, one of which is that the device is easy to emulate in QEMU, which provides an alternative to testing the actual device and is much more researcher-friendly. While it's not strictly required, nor is it the only factor that we consider, it does make for a more enjoyable vulnerability research experience! In this blog post, we'll walk through emulating the R7000's UPnP daemon in QEMU to aid in the discovery and exploitation of vulnerabilities. Towards that end, this blog will demonstrate an exploit for a post-authenticated stack overflow vulnerability, and how to easily unpack the encrypted firmware updates for the R7000's Circle update daemon.

The first step in emulating the device is to unpack the firmware. For Linux-based systems, such as the R7000, the goal of unpacking is to obtain the device's root filesystem and Linux kernel image. The easiest way to accomplish this goal is by using the awesome binwalk tool. The below commands can be used to setup binwalk (in docker), and extract the R7000 version 1.0.11.128 firmware, which we'll be using throughout this blog.

Setting up an Emulator for the R7000

Emulating embedded devices is a very large and complex topic. However, for some Linux-based devices, such as the R7000, it is often easier to just emulate individual userland processes of interest rather than the entire device. Obviously, this approach won't work if a process interacts with a large number of other processes. However, neither the httpd or upnpd daemons (the two most common VR targets on the R7000) have problems with this approach.
First, we'll need to obtain a suitable Linux VM, either by using a prebuilt one or building one yourself. Ideally, we'll want to match the device's architecture as closely as possible. For ARM-based devices like the R7000, this tends to be easy. However, many MIPS-based devices, such as the DGN2200, this can be much harder as images built for an earlier MIPS processor will often refuse to run or crash on VMs built for a newer MIPS processor.
Debian provides a number of pre-built VM's that can be easily downloaded (see cdimage.debian.org and aurel32). The Debian Wiki also has information on building/downloading a VM. The QEMU command line to start the VM will vary, but here is an example for ARM64 using the prebuilt Debian image:

Next, we need to copy the extracted file system to the VM. Once binwalk has extracted the file system (see the previous section), you'll need to save it to a tarball. This step should be done as root to ensure the owner/groups and permissions are kept intact:

After unpacking the file system, we'll make a few modifications to the root filesystem to allow the processes to run. First, we'll need to make a few generic device files and directories that the system will expect:

On NETGEAR devices, libnvram reads configuration information from the device's NVRAM and is used by most processes to read their relevant settings, such as the configured IP address and device type.

Since we're emulating the target and don't have the NVRAM, we'll need to replace the libnvram library with a custom version that GRIMM developed. In order to get upnpd running, we'll need to return expected values for each setting, which we dumped from a live R7000.

To compile it and copy it to the guest, run the following commands (on the host):

The next step is to chroot inside of the root file system and execute the UPnP daemon:

If you try to run the UPnP daemon without the custom libnvram library, the daemon will exit almost immediately after starting. As often happens when emulating a service from an embedded device, some misconfiguration or incorrect device setup has caused the process to end early.

Let's turn to our friendly neighborhood debugger, spider-GDB, to help us figure out what's going wrong. Using our custom libnvram library causes the process to sleep for 5 seconds at startup so we can attach to it with a debugger. After starting up upnpd, we switch to another terminal, start GDB, and then attach to upnpd as shown in the below screenshot. After attaching, we'll set a breakpoint on the exit() function to find where upnpd is exiting. 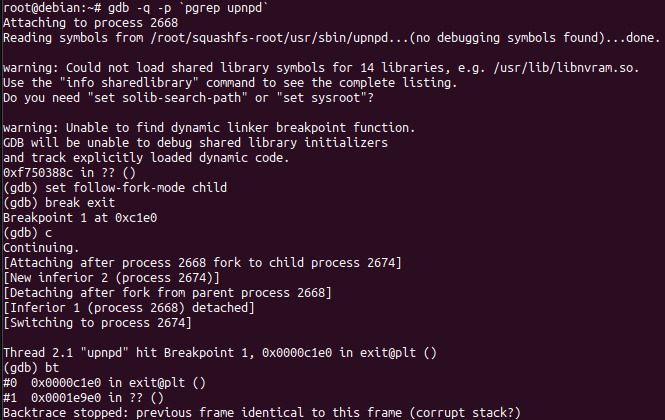 The above screenshot shows that upnpd called exit from the function at 0x1e9e0. Taking a look at this function in IDA (shown below), we can see that a failure in setsockopt causes the call to exit. 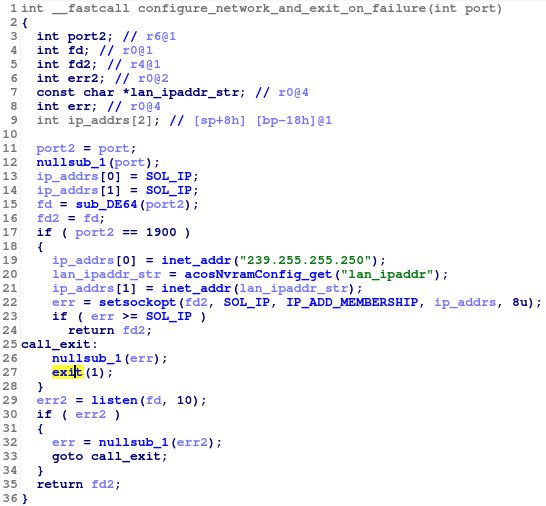 To fix this issue, we have a few different options:
As we're already debugging the UPnP daemon, we'll use GDB to redirect the execution and prevent the daemon from exiting. This can be accomplished with the below GDB batch command file, which can be passed into GDB with the -x command line option.

Now we can attach to GDB again, and it'll automatically skip over the exit function call. Without that exit call, upnpd runs normally and we can start dynamically exploring its network interface.

After a bit of static and dynamic analysis, we noticed a rather suspicious string in the upnpd binary, *#$^. If you've been following our blog, you'll notice that it's the same magic header used for parsing firmware updates used in the web server. As the previous firmware update check contained an exploitable stack overflow, this portion of code is worth examining. Upon further investigation, we can see that this code contains the exact same stack overflow that was previously fixed in the httpd daemon. 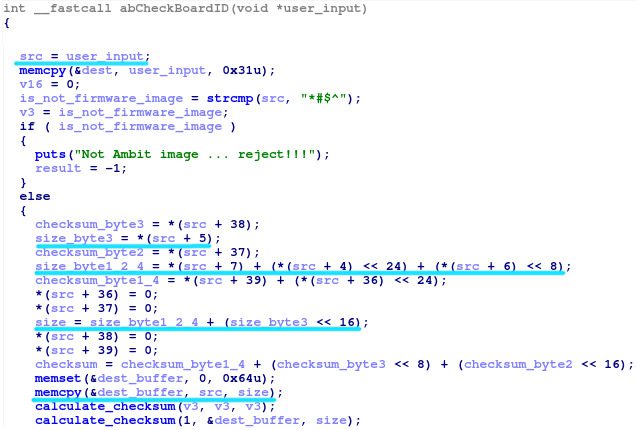 After a bit of dynamic testing with the upnpd web interface, we discover that this command is only accessible to authenticated users. Unlike the previous issue in the httpd web interface, the authentication is checked before parsing the firmware update. As such, only an authenticated attacker can exploit this issue. The below screenshots demonstrate how to login to the UPnP server and trigger a stack overflow using this bug. After triggering this bug, we can examine the registers and stack in GDB to help us understand the vulnerability and work on the exploit. 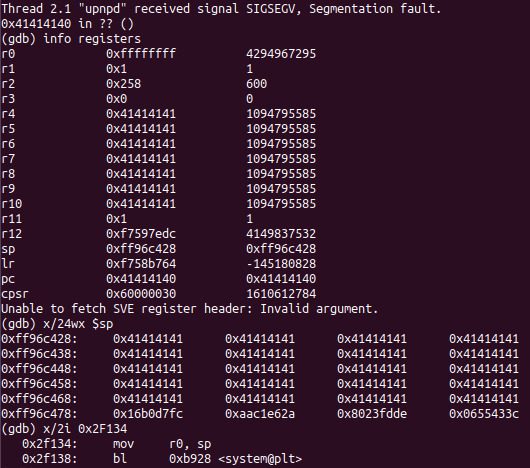 From the stack listing, we see that we can now control the r4-r10 and pc registers, as well as the top of the stack. Similar to the previous exploit for this issue, we'll use a system gadget to start an unauthenticated telnet server as root. The completed exploit for this issue is available in our NotQuite0DayFriday repository.

As we briefly mentioned in our previous blog on Circle, the Circle firmware, platform, and loader updates that the R7000 automatically downloads are encrypted. Another great use of our ability to emulate the R7000 is to decrypt these updates so that they can be further analyzed. In this section, we'll describe how to decrypt the updates and bypass the anti-debug protections built into the firmware decryption routines.
For each of the encrypted updates, the circled loader daemon downloads the updates to the /tmp/ directory, checks its signature against the included RSA public key, and then decrypts the file. As an example, let's examine the update_firmware function (shown below). This function calls the url_retrieve function to download the encrypted firmware (via a curl command) to /tmp/firmware.bin, and then calls the decrypt_validate_and_copy_file function to decrypt the firmware update and copy it to /tmp/sdfiles.tar.gz. Finally, it calls the decompress_archive function to extract the decrypted update to the /mnt/ directory. 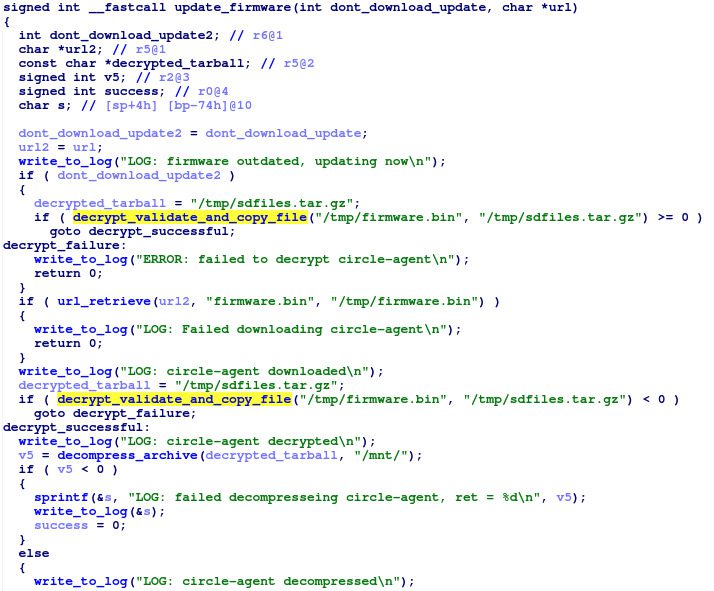 Based on this function, we can see that all of the magic happens within the decrypt_validate_and_copy_file. While a deeper understanding of this function could help us to reimplement the decryption routines and look for vulnerabilities, it's unnecessary in this case. We can decrypt the firmware updates by setting up the encrypted /tmp/firmware.bin file and then using GDB to move the instruction pointer directly to the decrypt_validate_and_copy_file function call, as shown in the below screenshot. Once execution is resumed, the decryption routine will run and write the decrypted firmware to /tmp/sdfiles.tar.gz. The only complication with this method is setting up the proper Global Offset Table reference in r4, but the formula can be determined statically from the disassembly. 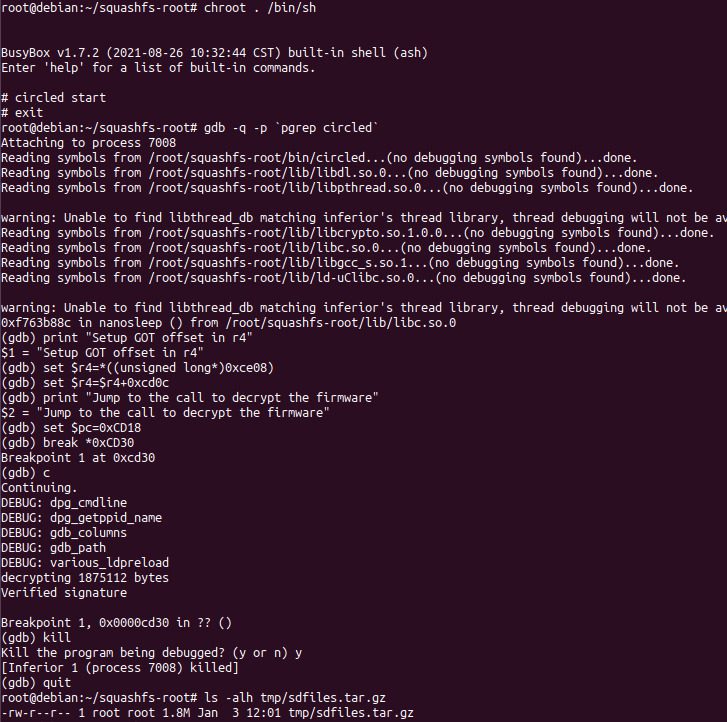 Wait, where was the anti-debug?

Now that we have the unencrypted firmware, you may be wondering how we evaded the anti-debug features. As it just so happens, the workflow described above bypasses all of the anti-debug mechanisms without specifically trying to avoid them. The first time that we decrypted the firmware, we didn't realize that the circled loader included anti-debug at all. After we saw that the outputted strings include the phrase "gdb", we investigated further. Before decrypting the firmware, the decrypt_validate_and_copy_file function calls the detect_debugger function, which performs the anti-debug checks. If any of the checks detect a debugger, circled will refuse to decrypt the firmware. The following checks are performed:
These checks ensure that GDB, strace, or ltrace did not start circled and that the process does not have any arbitrary libraries injected into it. However, these checks can be bypassed in a number of different ways, such as:

This blog describes the process for emulating the NETGEAR R7000. The process used in this blog to emulate the R7000 can be easily reused to emulate similar Linux-based embedded devices. Emulating a target provides the researcher with a substantially improved debug environment. Additionally, in instances where hardware is unavailable, emulation may be the only way to dynamically inspect the software. To illustrate the usefulness of device emulation, we used our emulated R7000 to examine a stack overflow vulnerability and decrypt NETGEAR's encrypted circle firmware updates.

Want to join us and perform work like this? We’re hiring. Need help finding or analyzing your bugs? Feel free to contact us.